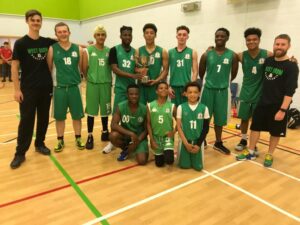 Our under 17s currently compete in the Youth Basketball League West Division. Last season they enjoyed a successful season winning the WMFS Trophy while finishing as league runners up before losing to eventual playoff winners Redditch in a heart breaking one point semi final loss. Many of our under 17s regularly represent our under 19s and mens program.

For all the latest fixtures and result from around the Youth Basketball League see the link below: