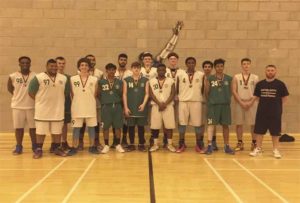 Our new mens development team (previously our under 19s team) comprises of u17s, u19s and senior men. This new team provides an important stepping stone in the development of our youngsters, preparing them for mens basketball, while providing a starting point for adults who want to get involved with the game of basketball.

Our mens development team currently compete in the West Midlands Basketball/Youth Basketball Development League. Last season as under 19s we finished the season as YBL league runners up and made it to the playoff semi-finals. This team are still chasing their first elusive WM/YBL championship.

For the latest fixtures and result from the Youth Basketball League see the link below: