Our under 13s and under 17s have been crowned YBL Summer League Champions. Yesterday both teams travelled to Stourport for their respective Summer League finals.

Up first the under 17s took on familiar foe Frankley Falcons. A depleted under 17s team due to lack of availability was boosted by the addition of under 13s Deago Chambers and Jaivir Singh along with under 15s Clinton Osagie, Harrison Tuckwell and Shaquille Chileshe all of who played extended minutes, making positive contributions. With just five under 17s available to play the team knew they were the underdogs going into the game. Isaac Blackwood set the tone for the team defensively stifling Frankley’s ball handlers while Taurai Dzimwasha controlled boards at both ends of the floor. Louis O’Driscoll, Daniel Coley and Joel Adeyemi also made solid contributions, particularly defensively.

Following on the under 13s took to the court to take on Coventry Elite. In what was a very physical, scrappy game the under 13s were able to come away with a three point victory in a game that could’ve gone either way.

Club director, Liam Sheridan said “I am so proud of the club today. With their backs against the wall, the under 17s were able to win a game that on paper they were totally outmatched in. I am so proud of Shaun (Coach) and the players for the passion and discipline they displayed today. The under 13s coaching staff and players have developed so much over the past year and today they have shown their growth and development. I am really looking forward to supporting them on their coaching journeys next season.”

In addition to the clubs success we would also like to celebrate the work of Bakari from under 13s who is in Manchester this weekend, reprising the West Midlands at the Basketball England Regional Tournament. 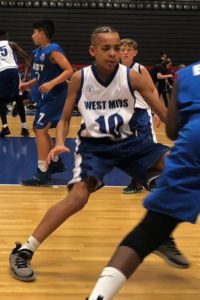 “I am so pleased for Bakari to be selected to represent the region. It is a testament to his hardwork as well as that of the coaching staff. I hope Bakari’s selection will inspire others within the club to take advantage of the Aspire Programme that is available to them.” Club Director and Aspire Head Coach, Liam Sheridan.